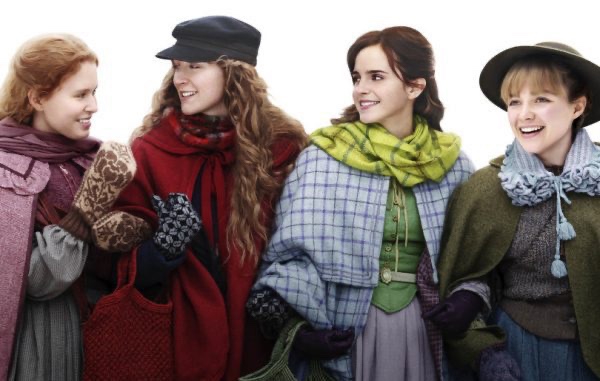 There isn’t a lot that hasn’t already been said about this classic novel and its various adaptions over the years. This adaption has a fresh outlook, both editing and narrative-wise, and it’s interesting to see modern-day cast members in all the familiar roles. With Saoirse Ronan at the helm as Jo March, director Greta Gerwig chose to film the characters’ lives via flashback scenes, probably assuming we already know the story. This made it easier to contrast the happy and sad moments, their childish dreams compared to their actual fate, and how life has ironic twists and turns that can either be cruel or humorous.

Does this version stand out amidst the others? There are several film adaptions, including one that takes place in modern times, and even one that was made in 1918! I’d say though it does, even if I haven’t seen all of them.

My overall impression was that it was good, but it was hard for me not to compare it to the 1994 one with Winona Ryder- namely, the one I grew up watching several times. Even though it has been years since I’ve watched that one, I know it by heart. I think this one does lack the same spirit of joy. Not that it doesn’t have its moments, but it suffered from a small problem, and that was the dialogue. It wasn’t bad, but it was a bit rushed. Sort of a way to make it so the people who see this movie and don’t know the story can keep up. In my opinion, good writing needs a balance of powerful actions, meaning that sometimes what a character doesn’t say is as important as what is overall said. This has the familiar scenes we remember- Amy burning Jo’s novel, Meg at her coming out ball, Jo turning down Lauri- and honestly the only way to keep it fresh was to film it through flashbacks, so that was a good idea on the director’s part. But like I mentioned, because the dialogue was a bit rushed, some of the characters struggled to be their own life. What I mean by that is, a character is not defined by their lines. They need to embody their own person, and no amount of exposition, lines, or even well-spoken dialogue will shape a character if that’s all they have.

The cast was spot on. I wasn’t the biggest fan of Lauri (Timothee Chalamet). I couldn’t really buy why they would all be so enthralled with him. Emma Watson’s accent slipped out now and again, which I don’t fault at all (I thought it was cute). I will say that Louis Garrel is now my favorite Professor Friedrich Bhaer. For some reason, he was perfect, and I think it’s because he had the least lines. His presence and his purpose was compelling.

The director’s decision to use flashbacks, as I mentioned, did make this film stand out. I read in one review that because we get to see Amy and Lauri in Paris for the first part of the film, it makes their ending up together seem more natural. Showing the contrast between Beth’s near-death experience, then the pain of later on dying from her weakened heart, was impactful, and naturally led to the conclusion, which was Jo finishing her novel, and nearly breaking down from grief. It’s her grief that leads her to almost do things she’d swear she’d never do. However, the conclusion also plays a sort of “trick,” on the audience. It keeps us guessing as to what the real ending is. The reason Greta Gerwig did this was because apparently Louisa May Alcott had to pair Jo up with someone, or else the printer wouldn’t publish her novel. So, the director does a similar thing, though it’s up to us to decide if the ending in Jo’s novel really happened, or if it was the ending she was forced to write. This narrative, while nothing new, is natural because of the original author’s plight. It opens up a discussion about characters, women, and our society, without hammering you in the head with it.

Overall, It’s hard for me to say who will enjoy it. While I certainly still like the 1994 version better, I would still watch this again. Anyone who loves period pieces though will definitely appreciate the authenticity, the spirit, and the classic story.