There’s something about this show that makes people come back to it over and over again. It’s a rare show that improves with each season, was short and sweet (by today’s standards seven seasons is short), and developed the characters almost perfectly. It’s funny, it’s warm, and it’s a well-written show.

Now, upon my fourth viewing of the series, I have to bring something up. Usually when you have a show or movie you love, you’ll notice things you may not have picked up on before, and this time I was contemplating the time when Anne and Chris moved away from Pawnee, and consequently Leslie and everyone else.

I quite honestly think that Anne wanted to get her kid away from Leslie.

Maybe I’m reading too deep into this, but it’s just a theory that I’ve thought about. You can see early on how personally Leslie dives into people’s lives. While she’s very caring and a good friend to everyone, eventually she gets so close to Anne, that she makes a binder for Anne to follow concerning her becoming a mom and raising a kid. Maybe a bit invasive? I think that may have been the moment that a small seed formed in Anne’s mind. She may not have realized it in that moment, but the signs were there. Anne realized that raising her kid would involve Leslie in nearly every aspect of their lives.

I don’t really blame her. We’ve all seen the episodes where Anne talks to Chris about maybe moving away, and of course when she brings it up Leslie loses her mind. And yes, eventually Leslie is busy with her own kids anyway. But she didn’t have kids yet, and Anne likely felt overwhelmed.

We all probably know someone or are friends with a “Leslie.” Someone who will do anything for us, loves to help us, and overall is a great person. But there are the other aspects of her character that we can relate to. Some people push themselves on us, others will do things for us that we are perfectly capable of doing, and they even try to form our opinions and tastes to fit theirs. The heart is not really in the wrong place. But seeing as there’s no stopping them unless you completely cut them off and avoid them, the “Leslie” friend will be there through thick and thin.

Not long after Anne reveals she wants to be a mom, we have the episode with Leslie’s bachelorette party. Anne plans the whole thing, makes it perfect for Leslie, only for it to come to a grinding halt because of Leslie’s career and involvement with the lot by Anne’s house. Sure it was inconvenient timing on their adversary’s part, but I think this was another factor that began to push Anne towards the idea of getting away from Leslie. She can’t even throw a party for Leslie. Sure, this wasn’t a case of Leslie pushing herself into Anne’s life, but I think it made it clear that Leslie’s “my way or the highway” mentality really does affect every single aspect of her life, and those around her. 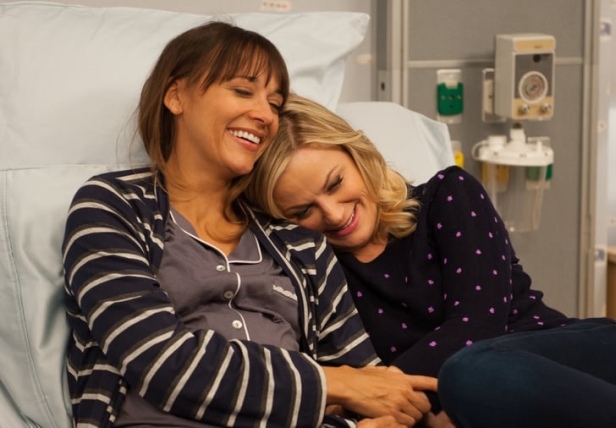 I could sit here all day and find all the flaws in Leslie or all the characters, but I know one thing. I think Anne just needed to love Leslie from far away. She wanted it to be her and Chris raising her kid, not her, Chris, and Leslie.

Anyway, it’s just a theory I had. You may think I’m a Parks and Rec obsessed lunatic, and I promise I’m not. A lot of people enjoy the show, and will continue to enjoy it in the future. This is just a little food for thought. Put your opinions in the comments!